I’m in Frankfurt for the annual PayComm MEETS Europe, my chance to catch up with practitioners from the continental card markets. It’s really hard to keep up with all of the change in the market, driven primarily because of the regulation rather than new technology. The pace of regulatory change seems relentless. A few years ago, I took part in an panel discussion about payments and regulation and innovation in Brussels. I remember it quite well because of my excellent fellow panelists and because of the nature of the discussions that followed. The panelists and topics, not that they are terribly relevant to the rest of this post, were:

In those discussions, I put forward a suggestion taking from Norbert Bielfeld’s superb December 2011 Working Paper “SEPA or payments innovation: a policy and business dilemma” [PDF] for a five year “legislative holiday” around payments to let the effects of the Payment Services Directive (PSD) and so forth settle down, so nothing would change until around now. That never happened, of course, and the Commission pressed forward with a regulatory agenda, one significant part of which was the reform of the card payment market in Europe.  Now, setting to one side that I have always favoured a competition agenda and regard interchange caps as inappropriate and counterproductive price-fixing, these reforms are beginning to impact the market.

How? Well, I remember that when he was speaking at this event last year, Peter Jones from PSE gave an excellent presentation on the impact of the new European card regulations on the different players in the payments game. You won’t be surprised to hear that I agree with his fundamental conclusion that the regulations represent a victory for merchants over banks and demonstrate the importance of having a concerted and coordinated lobby. He went on to say, and I hope my scribbled notes on this are accurate, that the commission don’t fully understand the impact of the changes that they have made. (I might be tempted to add that I’m not sure that any of us really do because of the chaotic nature of the changes.) These changes will inevitably have some unexpected consequences and it is part of the fun in the industry at the moment trying to guess what these consequences might be. I had not, for example, realised at that time that the reform of licensing on a pan-European basis means that Amex and Diners will have to restructure their franchise models.

I won’t take you through a detailed analysis of the changes that occurred last year and the final set of changes to come into place this month except to say that they will trigger have started to change the structure of the European cards industry. This is not inherently bad for everyone, of course. Chaos is a ladder, as they say, and Peter’s presentation alluded to opportunities that might arise from the enormous changes that will take place. Peter for example, said that he could see to pan-European “common carrier” real-time networks evolving from the impending separation of brand and processing for the international card schemes and suggested that with good strategies the debit portion could emerge into a pan-European immediate settlement system. 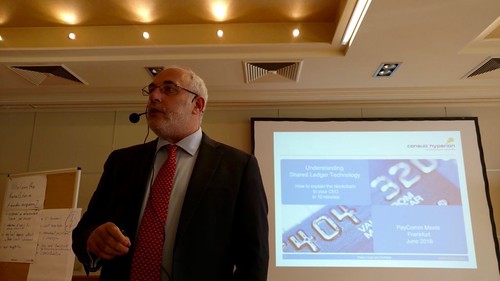 However, this year I want to focus on two of his conclusions that I think were both correct and of tremendous importance. I think that  they might not have been recognised as such by some stakeholders who were focusing on the reorganisation of the card business rather than the larger context. These conclusions are entirely congruent with the strategic perspectives that we shared with our clients and, as I down to PayComm 2016, I think it’s worth opening them up for discussion again.

As we have long advised our clients, a working push payment infrastructure (ie, smart devices and an immediate settlement network) means that a lot of day-to-day payments will shift to the infrastructure).

The first is that the heavy regulation of interchange-based card products will mean energy, investment and imagination being directed into non-card credit products, a driver that I have referred to before as the “push to push”. It is hardly a surprising prediction that banks and others will want to develop businesses that offer higher margins. As the margins on the card business are regulated down the ability to offer rewards, cutback, loyalty and other services is necessarily restricted. If mobile-centric account to account payment services can deliver better functionality and more attractive propositions to customers then the merchants will have to take them and pay more than for card products.

The second is that the payment services directive provisions on open access to payment accounts that we have discussed several times before on the blog will mean that (unless they are totally insane) banks will compete to offer what our Australian cousins call “overlay services” in order to compete with non-bank overlay services. Such value added service providers will use the account information service provider (AISP) APIs and the payment initiation service provider (PISP) APIs to deliver services to their customers. Now this has a number of strategic problems for banks to wrestle with. Banks are naturally concerned about third-party access to accounts relegating them to the role of commoditised, utility pipes for money because “over the top” players such as Facebook, Apple, Google and the other usual suspects will form a layer between the banks and their customers. But of course some banks might move aggressively to form the layer between other banks and their customers by providing better API services to those over the top players or they might decide to specialise in particular areas of the business and make themselves more attractive to customers in those niche is.

During the excellent PayComm workshop on instant payments, led by Andy Makkinje from Equens, a couple of people touched on the impact of these two trends (i.e., the push to push together with API access for PSPs) together. A working instant payment infrastructure, that is opened up because of the API access to banks, is very likely to become the dominant retail payment system, certainly for e-commerce (which is where all of the card fraud is in Europe). It will be the simplest, cheapest and most pervasive solution to the payments problem, and it’s nearly here. If you look around Europe the trend is unstoppable. The reform of the card market may well be the end of the card market as we know it.

Tags: cards schemes, instant payments, p2p, payments, regulation
We have placed cookies on your device to ensure that we give you the best experience on our website. If you continue to use this site we will assume that you have agreed to that.OkRead more
View full website