[Dave Birch] As part of the debate around NFC at BAFTA, Forum friend Tony Moretta from Weve went up into his attic and dug out some amazing props to bring along. I won’t bore you with all of them, but check this out: it’s a vintage Mondex phone (Tony said that when he showed this to his son, his son asked “was that the first-ever telephone?”) of the type I last saw in my parents’ house circa 1997. 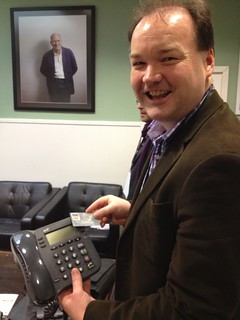 Why did my parents have one of these when Mondex was piloted in Swindon-City-of-the-Future a couple of decades ago? Well, I pulled a few strings so that they could one to play with. I have to say that they loved it. The main reason why they loved it was nothing to do with Mondex: it was because, in those pre-smartphone days, it was a way of seeing your account balance without having to go to the bank or phone the branch. Thus, they could see when salaries had been paid in and when bills had been paid out. This was a genuine time- and labour-saving invention to them, and they were very sorry to see it go. The only thing they actually used Mondex for — and my Dad certainly did value it for that — was for car parking, where putting in the card (there was no PIN as, like everyone else who said that they wanted card lock/unlock devices all over the place, he never bothered locking) instead of searching for change was a really significant convenience play.

Tony had a Mondex wallet with him too, and took great delight in opening up the back to show… a Secure Element (as we now call them). Hhhmmm… a keyboard, a screen and a secure element… reminds me of something… 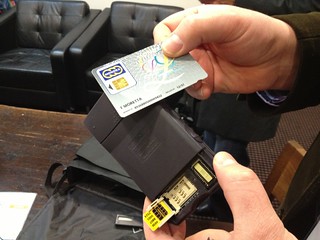 It’s important to remember what worked and what didn’t work. Too many people just white-out things that didn’t work and forget all about them rather than learning the real lessons. Mondex is where I learned a very valuable lesson. I’d done some work comparing the cost of payments, and I’d worked out that the marginal cost of Mondex payments was a tiny fraction of the cost of (say) credit or debit cards. Since Mondex transactions cost essentially nothing, I assumed that they would quickly become the dominant fraction. I mistakenly assumed that cost was everything.

“It will become ubiquitous – it’s the cheapest way of moving money around,” says Dave Birch,

You see the same things being said about Bitcoin today. This turned out to be absolutely and utterly wrong. And it still is. I paid my taxi fare over to BAFTA using Hailo. I don’t know what it cost the driver (I think 10%). When I paid at the car park this week I think I was charged an extra 40p to pay using my mobile phone. I didn’t care. Was my bus journey cheaper or more expensive because I paid using my Arriva app. I have no idea. Cost? No, convenience trumped everything else. Mondex was inconvenient.

In the case of Mondex, for example, you had to have a bank account (ie, you already had a debit card) in order to get one: you couldn’t just walk into a bank with twenty quid and walk out with twenty quid on a Mondex card. Looking back, there were some technical limitations as well: balance reading, for example, was a pain because you need to use a keyfob or electronic wallet to find out how much you had left on the card. And the ATM implementation was plain crazy: you had to put your ATM card in, then put your Mondex card in (most people never did: they just drew out cash).

In retrospect, that last point about ATMs seems particularly bizarre. There must be someone out there who can remember the NatWest thought processes around this, so I’d love to hear from them. The real point that I want to make, though, is that all of the factors that made Mondex inconvenient have vanished in a world with mobile phones, perhaps there is a kid in basement somewhere right now cooking up a bastard son of Mondex and Bitcoin and the e-cash revolution is, after all, just around the corner.

5 thoughts on “E-cash in the attic”