Yesterday we were chatting about the Governor of the Bank of England’s comments about central bank digital currency. I said I thought this was a good thing. Other people think the same.

The new Positive Money report on Digital Cash recommends that central banks should issue digital cash for six main reasons: it widens the range of options for monetary policy, it can make the financial system safer, it can encourage innovation in the payment system, it can recapture a portion of seigniorage, it can help to develop alternative finance businesses and it can improve financial inclusion.

From Are central banks a relic of the Industrial Revolution? | Consult Hyperion

As it happens, Dr. Ben Broadbent, who deputy governor of monetary policy at the BofE, appeared before the Lords economic affairs committee today. He was scheduled to

“explore the prospect of a central bank digital currency and the effect it could have on commercial banks”.

This was part of a session that also included evidence from my good friend Simon Taylor, formerly of Barclays Bank, and the noted financier Blythe Masters who is in charge of Digital Asset Holdings (DAH) and you can see it all online here.

OK, so far so good. I’ve written about this topic in exhausting detail before, and the truth is I’m rather a fan of a strategic and planned shift towards digital currency. But the article goes on to say…

Surely use or otherwise of distributed ledgers is tangential and irrelevant to the issue of digital currency. The payment mechanism has nothing to do with the currency. So, if Dr. Broadbent means that the Bank is thinking of using a shared ledger to manage personal accounts for individuals, where account transfers are settled instantly in central bank balances, then all to the well and good.

I simply do not see the efficiency of “a digital form of legal tender” as being evidence that the government might issue a UK cryptocurrency as some in the Bitcoin world have said.

From Britcoin or Brit-PESA? | Consult Hyperion

On the other hand, if Dr. Broadbent means that the Bank his going to set up a shared ledger that will be implemented using a blockchain that incentivises consensus-forming work with an on-chain asset (i.e., a Bitcoin-like Britcoin) then I think he must have been inadequately briefed. Why on Earth would a central bank abandon its money supply management duties to a cryptographic algorithm? That makes no sense at all.

Since the latter explanation is implausible — and if you listen to his evidence to the Lords you will notice that deputy governors of the Bank of England are very well-briefed indeed — the only explanation for the “Britcoin” tag is journalists confusing digital currency and cryptography and jumbling up the use of double-permissionless shared ledgers with double-permissioned shared ledgers. I suppose it’s an easy mistake to make, so let’s put it to bed once and for all. Here is  a handy cut-out-n-keep guide: 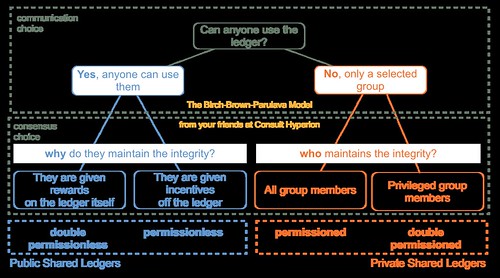 Would the Bank of England get behind a Sterling-backed Bitcoin? I think not. In fact, I think I’m coming round to Robert Sam’s thinking about the role of Bitcoin in the greater scheme of things with respect to the co-evolution of money and technology. Robert wrote a very good note about this called “Some crypto quibbles with Threadneedle Street” in response to one of the early Bank of England research notes about Bitcoin back in 2014, suggesting that, as he put it, “digital currency with a deterministic money supply function” is not a feature but a limitation of early cryptocurrency designs (and that a capped supply function such as Bitcoin’s is a “bug” on economic grounds).

As to the key question of whether a central bank or someone else should provide money, Robert alludes to the problem with the marginal cost of the production of competing private monies, what I often refer to in blog posts and talks as the big problem of small change. The problem is this. If privately produced money is successful as a means of exchange and earns a profit for its producer in the form of seigniorage (it is hard to see how cash replacement can earn transaction fees so in the long term I imagine these to be asymptotic to zero) then it will invite competitors and those competitors, provided the monies they produce are reasonable substitutes for each other, will drive down the cost of the private money to its marginal cost of production. In our digital world, however, the marginal cost of production is to all intents and purposes zero and so that private companies will bail and only the state can deliver the a sustainable money as a means of exchange (remember, this has nothing to do with it being a currency or not).

Hence it is very difficult to imagine how competing private currencies that are nothing more than direct substitutes for national fiat currencies can obtain any traction at all. This nudges me further towards thinking that if the imperfections of fiat currency are to be addressed in the free market it will be by currencies that are more closely linked to the communities that use them and that embody some values of those communities. I often use the example of a gold-backed interest-free electronic currency for the Islamic diaspora as a simple thought experiment, a sort of hard ECU for the new millennium, a currency that will be widely used but never exist in physical form.  But that’s for another time.

Suppose, however, that we stay with fiat currency and central banks. Now, if Bitcoin is to be used in that role (i.e. as a medium of exchange) it’s volatility is undesirable but that does not mean that it needs to display the long-term stability that is required of a store of value. That’s a different function of money and can be implemented in a different way. It does however mean that Gresham’s Law will come in to play and drive Bitcoins out of the marketplace (to speculators, at least in the short term) and that no-one will hold them for transaction purposes. As far as I can tell, this is where we are now anyway.

So what does all of this mean? Well I’m not sure I have any more insight into this than any other commentators but my take on it is that while the marginal cost of production of Bitcoin is undeniably higher than the marginal cost of production of other kinds of private money, that doesn’t really mean anything because Bitcoin will never be used as money in the same way. On the other hand it does mean that it is hard to imagine why anyone who wants to produce private money, and in particular a digital version of a fiat currency, will use it even if they want to use a shared ledger for other reasons (something I personally favour). On the contrary, since we have no reason to suspect that the proof-of-work and blockchain structure is the best consensus mechanism, it seems more likely that if (say) the Bank of England were to decide to implement a digital sterling, then it is highly likely that they would use some other mechanism that relies on validators (e.g., commercial banks) rather than miners. Let’s come back to this in a minute.

I don’t think there’s ever going to be a Britcoin. Central-bank digital currency is about balances and an appropriately private protocol for moving value between accounts. My prediction is that this would look more like the bastard child of Ripple and M-PESA than a blockchain cryptocurrency with a 1-1 reserve in Sterling. And guess what…

As I was sitting down to finish off this post, what should flow in through the internet tubes but  Bank of England Staff Working Paper No. 605 by John Barrdear and Michael Kumhof, “The macroeconomics of central bank issued digital currencies”. This is referred to in Dr. Broadbent’s evidence to the House of Lords. It says that (amongst other things) that

We study the macroeconomic consequences of issuing central bank digital currency (CBDC) — a universally accessible and interest-bearing central bank liability, implemented via distributed ledgers, that competes with bank deposits as medium of exchange. In a DSGE model calibrated to match the pre-crisis United States, we find that CBDC issuance of 30% of GDP, against government bonds, could permanently raise GDP by as much as 3%, due to reductions in real interest rates, distortionary taxes, and monetary transaction costs. Countercyclical CBDC price or quantity rules, as a second monetary policy instrument, could substantially improve the central bank’s ability to stabilise the business cycle. 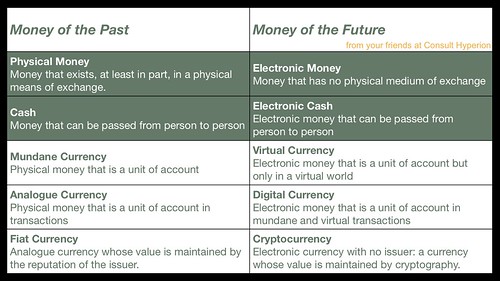 I’ve read the working paper and while I don’t understand the economic model at the heart of it (I have no idea what “credit cycle shocks policy rate corridors” are) I do understand the implications and the observations of the authors. I have come to similar conclusions but from the technological direction. Since the observations of the Bank from an economic perspective correlate so closely with my observations from the technological perspective (I think I may have mentioned that I’m writing a book about this at the moment) I think I’ll finish here just by highlighting a few key points that I have mentioned on the blog before.

There is no sane argument against digital fiat. Let’s get on with it. And let’s have no limit on the number of different currencies that the ledger might hold.

Tags: bank of england, blockchain, digital currency, shared ledger
We have placed cookies on your device to ensure that we give you the best experience on our website. If you continue to use this site we will assume that you have agreed to that.OkRead more
View full website