Oh no! Shock horror! Something must be done! It’s an outrage! Thank goodness we have a free press to expose this egregious, calamitous, nefarious episode! Questions must be asked in Parliament. Yes, it turns out that a famous author (J. K. Rowling who wrote the tedious “Harry Potter” series of children’s books) has been trimming her hedge. 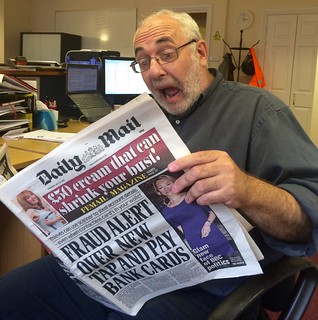 Oh, and on the front page the non-issue of contactless card security has come up once again, following a report from the consumer organisation “Which?”. They reported that contactless cards work according to their specifications. Using a standard reader they were able to interrogate standard cards and obtain the standard details, which do not include either the cardholder’s name or the security code. You cannot use the details to make a clone contactless card or a clone chip and PIN card or a counterfeit magnetic stripe card.

Yet the Which? researchers managed to buy a £3,000 TV set using one of the cards.

No, they didn’t. They did not use one of the cards. What they did was to use the card number and expiry date with a merchant who does not check the name, address or security code. Retailers are entirely free to do this, it’s up to them. The point of the card system is to protect consumers, not retailers. If retailers decide to deliver a £3,000 TV to a block of flats in Hoxton on the basis of a card number and expiry date (without checking the name, address or security code) then that is their look out. The customer will spot the unusual transaction and charge it back. The bank will charge it back to the merchant. The merchant will be out of £3,000. But it was their choice, so who cares? Anyway, the researchers were surprised that some merchants would behave in this fashion.

We doubted we’d be able to make purchases without the cardholder’s name or CVV code, but we were wrong.

Remember, this is the same information that a fraudster could obtain just by looking at your card. Luckily, the newspapers have also had some useful advice for customers concerned about card security.

James keeps his debit card at home and the PIN is still in the sealed letter. That way, if a fraudster takes money from his account, he can easily prove to the bank that he hasn’t used it.

[From There’s nothing James Freedman doesn’t know about fraud … so why won’t HE use contactless cards? | This is Money]

Had the researchers glanced at any or our blog posts about contactless security, starting back in 2006, they would have known about this uninteresting risk. It isn’t news. I’ve suggested before that rather than panic about the non-issue of contactless security, their energies might be better directed toward educating the public about the technology and the distribution of liabilities.

The traditional way of educating the mass market in the UK about anything is to pester the BBC to include it as an EastEnders story line.

[From Crime and contactless]

You may think that I was being flippant with that remark last year but I wasn’t. In fact, the soap opera route has been tried, albeit on the other side.

Sadly, I have never watched either Coronation Street or Emmerdale, although I know what they are because Harry Hill used to make fun of them on “TV Burp”, so I’m not best-placed to suggest appropriate plot lines. But perhaps one of the characters spotting a £3,000 charge to Currys on their statement and then charging it back might be far too dull.

Now, you might imagine that these stories are so trivial as to be utterly uninteresting. And on the one hand they are. But on the other hand I find them intensely annoying, because they are so insulting. “Fraud alert” over a payment architecture that has been under development for a decade? That’s a headline that suggests that I am a moron. As are the experienced risk analysis and payments architecture experts at Consult Hyperion. As are the risk management experts at retail banks. As are the strategists at Visa and MasterCard.

What are the media thinking? That there is no point over the past decade when it occurred to anybody that because the EMV standard involves the passing of unencrypted data between the card and the point of sale terminal that anyone with a standard reader would be able to obtain the card number and expiry date? That the thousands of people involved in the planning, design, launch and management of contactless cards were as thick as planks? That the issuing banks were so dumb to accept full liability for the fraudulent use of contactless cards that they are going to go out of business? That merchants who accept card numbers and expiry dates without a valid cardholder name or address are simply too dense to understand the liability shift?

Just to be clear. The actual figures (from the UK Cards Association) are that fraud losses from contactless cards are less than for contact cards, for the obvious reason that card numbers are, by and large, stolen online in vast bulk (see, in the Daily Mail, for example “Benson bought stolen credit card details from Russian gangsters”) and not obtained by individual fraudsters waving phones around peoples’ arses (although that would work, as this video shows).

You can tell from the Nokia 6131 used in that video that it was made a good few years ago but, as yet, the gangs of pickpockets in London seem to prefer the old fashioned methods, so you’re much better off carrying a contactless card (that can be refunded in the event of loss) rather than cash (which cannot).

Don’t panic. Unless you spot someone holding their mobile phone a little too close to my backside on the tube, that is.

Tags: contactless, fraud, risk analysis
We have placed cookies on your device to ensure that we give you the best experience on our website. If you continue to use this site we will assume that you have agreed to that.OkRead more
View full website