Some fascinating debates around identity in my Twitterverse last week, considering the issue of the extent to which digital identity of one form or another can contribute to financial inclusion (and, by extension, social inclusion).

Well, to be honest, I think I’ve nailed my colours to the mast on this one. 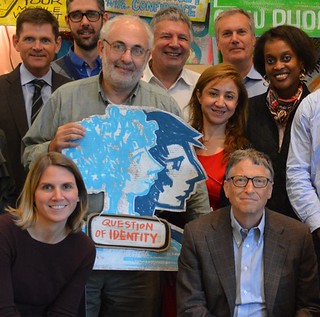 I think that identity is crucial to the financial inclusion effort, and I’m not saying it just because Bill does…

Naturally, I couldn’t help but notice [Bill Gates] emphasis on digital identity as being equally as important as digital money in transforming the lives of the least well-off.

It seems to me that he was entirely right to point out that the issues of social and financial inclusion are linked and that the lack of identity infrastructure is a barrier to financial services for billions of people. And please also note that I’m fully aware that the issue of exclusion does not solely apply to developing countries. Even in developed countries, there are people who need but cannot obtain access to financial services.

When it comes to financial inclusion, one of the central issues is identity. And while the popular image of those excluded from the global economy are of those struggling in developing or impoverished economies—say the migratory sherpa lacking a home address—the way our current system is set up means that financial exclusion can strike anyone.

[From On the Road at G20: the Role of Identity in Financial Inclusion | Ripple]

The question is, as always, what we mean by “identity”. Do we mean a government-issued, single-source-of-truth identity like the Aadhar in India? Such a top-down approach is appealing to politicians but it is expensive and, as I wrote last year, vulnerable. It is possible that for emerging markets, a bottom-up approach is more practical. If we can find ways to effectively “crowdsource” identity we might end up with identities that are cheaper to deliver and harder to forge, identities that are suited to the risk-based approach of the FATF at lower values but that can be bound to more traditional, top-down identities at higher values. There are a great many circumstances where I might be prepared to engage in transactions with someone based on what the crowd thinks rather than what the government thinks anyway.

Cyber ID data (CID) provides a digital footprint from sources, such as social networks, ad networks, mobile and ecommerce sites, which can be used to address the very basic question, “Is this person who he claims to be?”
CID has the power to radically impact financial access for unbanked citizens

[From NextBillion.net | Unlocking the Unbanked]

As Consult Hyperion’s recent report for FSD Africa on the Somali remittance corridor’s problems (and potential solutions to those problems) make clear, it’s all about identity. Although… it depends what you mean by identity. Which is just the sort of thing, I imagine, that will be discussed in the “deep dive” session on financial inclusion at Consult Hyperion’s 18th annual Tomorrow’s Transactions Forum, which will be held in London on 18th-19th March. The session is chaired by Paul and features a keynote from Kosta Peric of the Bill and Melinda Gates Foundation and presentations by Millicom, GRM International, FSD Africa, Bitpesa, Western Union and others. You’d be mad to miss it, so nip over to Twitter and start checking out #ttforum15 right away.

Thanks to the incredible generosity of our sponsors (Worldpay, Visa Europe, Vocalink, NCR Alaric and Olswang) the tickets are virtually free at £550 + VAT. The Forum is limited to 100 delegates as always, so run (don’t walk) over to https://payprocess.chyp.com/ to secure your place right away. And yes, I will take Bitcoin if you don’t want your spouse to see it on a credit card statement at the end of the month.

One thought on “Identity in Financial Inclusion”

Tags: identity, inclusion
We have placed cookies on your device to ensure that we give you the best experience on our website. If you continue to use this site we will assume that you have agreed to that.OkRead more
View full website