Look, I don’t mean to imply that everyone who wants to keep cash, and in particular high-value banknotes, in circulation is doing so only to help to minimise the costs of criminal enterprise and to facilitate money laundering on a grand scale. That would be ridiculous, On the other hand, though, there does seem to be some correlation between flipping great wodges of cash and at least the suspicion of not entirely above board entrepreneurship. But that aside…

Police arrested Dmitry Zakharchenko, the deputy head of the Energy Industry Department of the General Administration of Economic Security and Combating the Corruption (GAESCC)… According to investigators, police seized a sum of some $120 million and € 2 million ($2.2 million).

Who knew a life in public service could be so rewarding? I’m sure there are entirely innocent reasons why Dmitry had a A HUNDRED AND TWENTY MILLION DOLLARS in cash in his apartment. Perhaps he didn’t get time to pop to the bank, or perhaps the night safe was broken. Either way, I imagine it must have been rather inconvenient to step over flipping great wodges of cash to get to the bathroom in the middle of the night, so it makes me wonder why he didn’t either deposit the money in a bank (although I imagine yellow press scare stories about negative interest rates might have put him off) or convert it to something with less volume. Bitcoin might have been a good choice, but I suspect that like most people in a similar situation, the untraceable nature of cash must have been appealing for some reason. 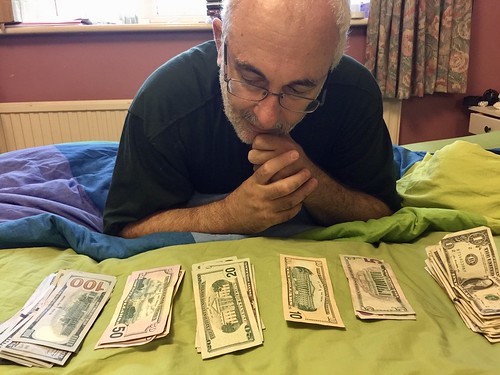 I keep my cash under the bed but I’ve put some on the top of the bed ready for Money2020.

While people often refer to bitcoin as anonymous, it really isn’t. Ah, you might say. But in the world of bitcoin, smart criminals will use mixers and such like to obfuscate the origin of coins and thus confound the authorities. Yeah, whatever. That’s because criminals aren’t using it for large scale enterprise. As soon as they do, I don’t doubt that the relevant authorities will take quick and simple action. Bitcoins lack of fungibility makes it vulnerable to straightforward regulation in that respect.

But what if law enforcement goes to the biggest miners in the world (representing at least 51% of the hashpower) and tells them that if they continue to confirm easily identifiable mixing transactions, they will be accused of money laundering.

From On Fungibility, Bitcoin, Monero and why ZCash is a bad idea. – We Use Cash

“The total addressable market of people who want to buy bitcoin is very, very thin,”

Indeed. And most of them aren’t in America or any other developed market. I don’t have time to go and check the latest figures but as far as I know pretty much all of the Bitcoins in the world are being bought for Yuan and traded on Chinese exchanges. It’s easy to understand why.

From Bram Cohen’s answer to Bram Cohen: What is the state of Bitcoin in 2016? – Quora

This robust (and accurate) remark from Bram Cohen (the chap who invented BitTorrent) is just what the Bitcoin chaps don’t want to hear. As I’ve said before, and will say again (having being falsely accused of being “anti-Bitcoin” today), I think Craig Wright’s observations on this topic are that ones that resonate with me.

The mining of bitcoin is a security service that alone creates no wealth. Consequently, those using the network pay for the service.

From Bitcoin and the costs of consumption – Dr. Craig Wright Blog

A shared security service that people will pay to use seems like a much better way to imagine Bitcoin than as a new form of payment or a new kind of currency. This shared security service may be used for a great many things, most of them as yet undiscovered, and I don’t doubt that people will try and possibly succeed to build a viable payment service on top of Bitcoin, but I am unconvinced that Bitcoin itself will be that mass market payment service to take on Visa and MasterCard.

5 thoughts on “If bitcoin can’t succeed at money laundering, what can it succeed at?”

Tags: cryptocurrency
We have placed cookies on your device to ensure that we give you the best experience on our website. If you continue to use this site we will assume that you have agreed to that.OkRead more
View full website