The Bill and Melinda Gates Foundation is most, and deservedly, well-known for their work in tackling big, big problems such as eradicating polio. But what you may not know is that they have a programme called Financial Services for the Poor (FSP) which aims to help people out of poverty by providing digital financial services (DFS). The Foundation decided to create an external advisory group to help to steer, support and promote DFS. This is called the Platform Enablers Group, because the Foundation sees DFS as a platform for products and services that will make a real and sustained difference to the lives of least well-off around the world.

I was flattered to be asked to be part of this advisory group and honoured to be able accept (on behalf of my colleagues at Consult Hyperion who actually do the ground-breaking work in delivering financial services in Kenya, Nigeria and elsewhere). There are two reasons for this:

At a recent meeting of the group, there was a discussion about trying to identify the key conditions for payment innovation that could help with financial inclusion and therefore with social inclusion. The group discussions are according to the Chatham House rule, so I can’t attribute these comments (other than to say that they come from a very clever and very experienced person and I always take her opinions very seriously) but I wanted to share them. I should add that I do have the permission of the Foundation to use this picture to illustrate the discussion: 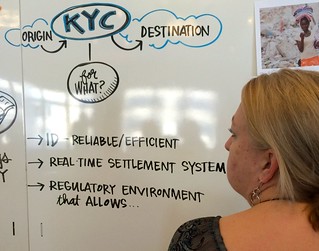 As you can see in the picture, the three enablers discussed were:

I couldn’t help but remark that the US has none of these with the result that, as another of the advisors pointed out, there are something in the region of a hundred million people in the US today who are unserved or underserved by the existing financial services providers.

For consumers, the costs of using cash are regressive and fall heaviest on the “unbanked” – mostly low-income individuals who can least afford it.

[From Cash Is a Wasteful System, but Hard to Replace – Room for Debate – NYTimes.com]

Tags: payments, regulation, USA
We have placed cookies on your device to ensure that we give you the best experience on our website. If you continue to use this site we will assume that you have agreed to that.OkRead more
View full website