The House of Lords (for foreign readers, this is the unelected second chamber of government, stuffed full of government placemen – so many, in fact, that the Lords are begging the government to stop sending more of them) has been getting into a bit of a tizzy about cheques.

Lord Sassoon: the criteria which the Payments Council itself put forward and which the previous Government welcomed back in December 2009—I echo that welcome—was that the new system had to be generally available, generally acceptable to its users and widely adopted. There also has to be, in the view of the Government, a paper-based system

[From Hansard – Lords | Houses of Parliament]

Surely we can do something more interesting than that. Cheque replacement was a subject of much conversation in my vicinity last week. Consult Hyperion were one of the sponsors of this Intellect / Payments Council conference on Driving Change in Payments, and an excellent event it was too. Here I am with the Conference Chair Michael Alexander (an Independent Director of the Payments Council), telling him just that. 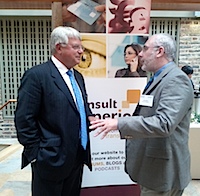 Mobile was one of the recurrent themes. Alastair Lukies, the CEO of Monitise, was one of the speakers (see below) and one of the subjects he touched on in passing was the potential for mobile to provide the replacement for cheques in the UK. This is a hot topic, since the Payments Council has announced its plan to end cheque clearing in 2018. This, in turn, caused a predictable response from the reactionary press and various interest groups, all of whom want to retain the current system of expensive cheques subsidised by people like me who hate them. 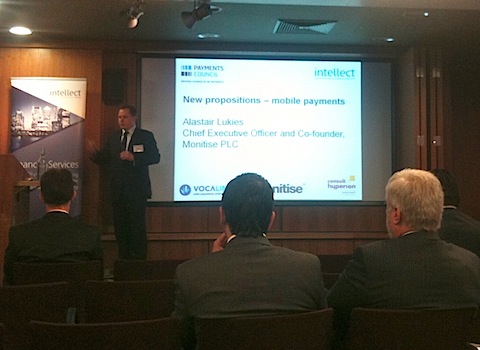 Just to give you a snapshot of the views of the British public — which are of no interest to me, naturally, but may serve to frame the debate here — I cut a few comments from a recent article about this on the Daily Telegraph website,

If cheques are expensive to process then increase the price, I think I already pay 35p per cheque

Businesses do, but personal customers have grown used to what they perceive to be free banking. I’m all for transparent pricing. If the Payments Council decides to retain cheque clearing but charge full cost recovery to users, that would be a reasonable outcome. However, this would mean that cheques would cost probably even more than 35p each, and once again the pleading for special interests will become the substitute for the real debate.

It is plausible, although I don’t think it is likely, that the government might impose a social obligation on banks and payment institutions to execute low-value transactions (those, say, of a value less than the largest banknote in circulation, €500) for free as a social obligation in return for their licenses. The root problem is that people think not only that payments should be free but that someone payments are free. This is wrong, but you can imagine the newspaper headlines about the charity for sick children being forced to pay outrageous processing fees by the evil financial sector. (The impact on charities came up a few times in casual discussion around the topic at the recent event.) Some people are worried that this will even put an end to some charities.

the Institute of Fundraising has warned that the plans could be disastrous for charities, some of which receive up to 80% of their income through cheques.

[From Finextra: Dumping cheques could “spell disaster” for UK charities]

I don’t understand what they are thinking. Getting rid of cheques will save them a fortune. Charities in countries without cheques — eg, Finland — seem to be able to raise money without too much trouble. I’ve already made a perfectly sensible and reasonable suggestion as to how to set up unique financial sector identifiers that can serve as payments addresses for mobile and online payments and for the 0.1% of the population who don’t want to use these (eg, my mother) they can just call an 800 number and effect the transfer with voice authentication (or something similar). Why on Earth should we be targeting paper-based replacement? Doesn’t this discriminate against people who can’t read or write? Let’s set the bar higher.

It must be further noted that in the Telegraph, as well as a couple of other papers, the particular issue of paying the gardener was also seen as being an important payments use case in the UK. I thought at first that this might be something to do with the English class system, but it turns out that paying gardeners is an issue around the world!

I live in Belgium at the moment and have not used a cheque in years. All the transfers are immediate, not 3 days later which is just a scam by the UK banks to use your money for free for three days. If I pay the gardener its cash or a virement (transfer) easy.

Look, I’m sure there will be a small number of people who will find it hard to use mobile payments, or web payments, or whatever, just as there are a small number of people who find it hard to use cheques right now, but that’s no reason for the Payments Council to get fainthearted. The end of cheques in 2018 should be a stimulus to innovation in UK payments. Except, as I said before, it isn’t the end of cheques.

Cheques aren’t being outlawed in 2018, but cheque clearing is going to stop. If Associated Newspapers wants to apply for a Payment Institution (PI) licence and operate its own cheque system, then good luck to them

Surely the noble Lords can contribute some seed capital to assist the Daily Mail, Saga, Oxfam and the House of Parliament Tennis Club in creating the new paper-based system that they want.

One thought on “Lording it up”

Tags: cheques and checks, digital money electronic money mobile payments e-payment m-payment, payments
We have placed cookies on your device to ensure that we give you the best experience on our website. If you continue to use this site we will assume that you have agreed to that.OkRead more
View full website