[Dave Birch] Consult Hyperion were sponsors of the British Computer Society (BCS) eID seminar on 27th November 2012. Of particular interest to blog readers might be the final talk of the day, by Mr. Don Rogers from the Isle of Man Economic College, which concerned a proposed new payment system. 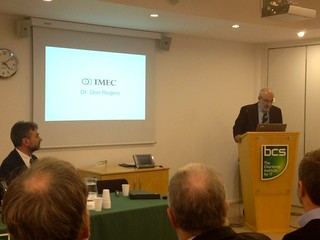 It think it merits some attention, so with permission here is an extract from the speech given by Mr. Rogers:

Hello and thank you. As already mentioned I’m Don Rogers. I’m Head of the Monetary Research department at the Isle of Man Economics College.

Before my current employment on digital payments research within the IMEC, I previously worked as a technical consultant for CashDex during the 90’s. For those younger than me (and I can see there are a few here), CashDex was a technically brilliant but conceptually flawed payment system. And it failed for a number of different reasons:

But more importantly the benefits (for the users) didn’t outweigh the convenience of sticking with the usual suspect… ‘Cash’.

In order to have a successful cashless system, we need to satisfy all the stakeholders; including the Government, Banks and most importantly the people. For the past 5 years I’ve been the chief researcher for a new cashless payment system funded by the governments Community Banking Springboard Scheme in collaboration with IMEC, BitTechBank Systems and the Efficient Tax Corporation.

The official title given to the project was ‘Public Rebate for Alternative Transactions’ but it was unfortunately shorted to PRAT which some people found amusing, so we began to use the unofficial public title the ‘Crime Pays System, or CPS.

CPS is a digital cash replacement. It allows the consumer to choose between two methods of payment upon purchase.

The first method is the default transaction which is free to the end users. It is called the ‘Light Exchange’ and is rather self explanatory… all transaction histories are uploaded to an open access server which allows anybody anywhere to view the transaction details. This type of transaction is designed to promote an environment of social accountability.

The alternative payment method is called the ‘Dark Exchange’. This option uses advanced cryptographic techniques to make the payment completely invisible, leaving no trace of the exchange, by anonymising all the transactions. A small levy in the region of 10% to 20% is paid per transaction. The ‘Dark exchange’ therefore offers privacy for your finances at a reasonable price. The revenue generated from people’s use of this system will be sent to a government department of their choosing.

People have labelled this a tax on privacy, but it’s more about paying for the unquantifiable problems that could be created through dark transactions such as cash.

CPS (unlike CashDex) offers something to all the stakeholders…

A practical means of resolving the tensions between our personal liberty and social responsibility.

I’m sure we’d all like to wish Mr. Rogers the best with his new system. I understand that a video of his talk will be made available online shortly.