Someone interrupted one of my rants against cash the other day by pointing out that in the last resort, cash is the only payment mechanism that society can depend on. Their trump card was reference to the aftermath of the recent Japanese cataclysm, where following a magnitude 9 earthquake and a tsunami, the nuclear reactors didn’t melt down but the payment system did.

I think this is wrong lesson to draw from it. Yes, there were some temporary problems with the card networks because of the disruption, but it’s important to note that this did not impact all cards: Japan has quite a rich retail payment landscape, as shown in this diagram (which I drew a couple of years ago, so it’s a bit dated, but you get the point).

I saw Nobuhiko Sugiura, Associate Dean of Chuo University Business School, give a good overview of the current situation at last year’s E-Money, Cards and Payments conference in Moscow. He said that e-money usage in Japan is growing rapidly but still a small fraction of total consumer spending (¥1 trillion out of a total of ¥300 trillion, a 300% increase in the last three years). A third of the population use e-money and half of them (ie, one sixth of the population) use it in their phones. It’s a competitive market, centred on non-banks because the Japanese banks have no real interest in handling small payments because or their cost base. The non-banks, as I’ve often noted on this blog, have different business models, not based on transaction fees. The railways, for example, don’t expect to earn anything from their e-money system, it’s about reducing their costs. In comparison, convenience stores want to issue e-money to reduce their cash float. The bottom line is that the of cash at POS in Japan is “already falling” because of e-money.

After the earthquake and tsunami, the offline electronic money systems (such as Edy and nanoco) carried on working so long as there was power and the backup battery systems or generators were working, so you could still pop round to 7-Eleven and buy your staples. In fact, it was people who kept their money in cash who suffered greatly.

In Japan, lots of people — especially older people — keep their life savings in cash in their homes. (The country’s banks pay very low interest rates, so the incentive to deposit that money into bank accounts is lower than in other countries.) This is all well and good, until a tsunami destroys your home and washes your money out to sea.

[From Schneier on Security: Unanticipated Security Risk of Keeping Your Money in a Home Safe]

That’s not to say that people didn’t want cash after the event.

The tragedy playing out in Japan this past week highlighted that in times of crisis, there’s nothing like cash in hand as the universal method of payment. By all accounts the banking system in Japan survived and is functioning well after the earthquake and tsunami – such is the level of disaster preparedness.  But Mizuho, Japan’s second largest bank, reported outages in its payments and ATM networks – coincidentally as demand for cash surged.

[From The end of cash for payments? Not so fast! – Microsoft Perspectives on Payments and Core Banking in Financial Services – Site Home – MSDN Blogs]

So they wanted cash, but did they need it? In this kind of catastrophe, where the online POS network goes down but the ATM network stays up and the ATMs remain stocked with notes, you could see people going and withdrawing cash. But suppose there are no ATMs?

Imagine that there was a magnitude 9 earthquake and a tsunami in Woking (unlikely – our last natural disaster was an ice age in 18,000 BCE) and when I go round to Waitrose to buy some bottled water and rice my John Lewis MasterCard proves useless because the acquiring network is down and the ATM proves useless because the ATM has no power. The store manager at Waitrose can leave the food to rot on the shelves or he can accept a signed IOU. He could accept no sale because of flaws in the electronic payments or he could develop a rational fall-back strategy. We discussed this a couple of years ago, with reference to the famous case study of the Irish bank strike.

The owners of shops and pubs knew their customers very well and so were perfectly capable of deciding whether to accept cheques (or just IOUs) from those customers. And since the customers also knew each other very well, they too could make sensible decisions about which paper to accept.

[From Digital Money: Payments without banks]

If I was the manager of Waitrose after the Woking earthquake, then I would simply accept payment by writing down card numbers, or photocopying driving licences, or taking pictures of customers, or whatever. The core of the issue is identification and trust, not the payment instrument. As many media commentators noted, society in Japan did not collapse. My conclusion: natural disasters are not a convincing argument for cash. 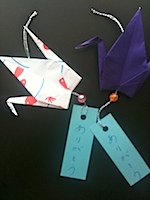 By the way, I case anyone was wondering about the origami cranes that I was giving out in Chicago this morning… My wife is a teaching assistant in a primary school in Surrey. The seven year old brother of one of the boys who was in her class (they boys have a Japanese mother) has been spending two hours every day for the last month making these (they are a symbol of peace in Japan) to raise money for the British Red Cross appeal for Japanese tsunami victims. Consult Hyperion have purchased a hundred of these beautiful and special cranes, so if you come to our office anytime over the next couple of weeks, please feel free to pick one up with our compliments.

2 thoughts on “Some observations on Japan”

Tags: contactless and nfc, digital money electronic money mobile payments e-payment m-payment, payment cards, retail
We have placed cookies on your device to ensure that we give you the best experience on our website. If you continue to use this site we will assume that you have agreed to that.OkRead more
View full website