Consult Hyperion has been working on a project called VOME with the UK Technology Strategy Board. The idea of the project is to help people who are specifying and designing new, mass-market products and services (eg, Consult Hyperion’s clients) to understand privacy issues and make better decisions on architecture.

VOME, a research project that will reveal and utilise end users’ ideas and concepts regarding privacy and consent, facilitating a clearer requirement of the hardware and software required to meet end users’ expectations.

Part of the project is about finding different ways to communicate with the public about privacy and factor their concerns into the requirements and design processes. Some of these ways involve various kinds of artistic experiments and it’s been fun to be involved with these. We’ve already taken part in a couple of unusual experiments, such as getting amateur writers to produce work about privacy from different perspectives.

More recently we have been working with Woking Writers’ Circle on the production of a collection of short stories and poems entitled ‘Privacy Perspectives’.

As one of the technical team, I have to say that it’s very useful to be forced to try to think about things like privacy-enhanced technology, data protection and risk in these different contexts. One the artistic experiments underway at the moment, primarily aimed at educating teenagers and young people about the value of their personal data, is the development of a card game that explores the concept. The card game experiment, lead by Dr. David Barnard-Wills from Cranfield University, has reached the point where the game needs playtesting. So… we all met up in London to play a couple of games of it. 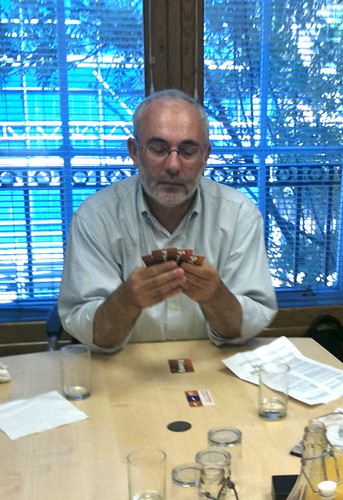 Turned out that not only had the chaps developed the game way further than I had imagined, but they’ve invented a pretty good game. Think the constant trading of “Settlers of Catan” with the power structures of “Illuminati” mixed with game play of “Crunch”. I liked it. 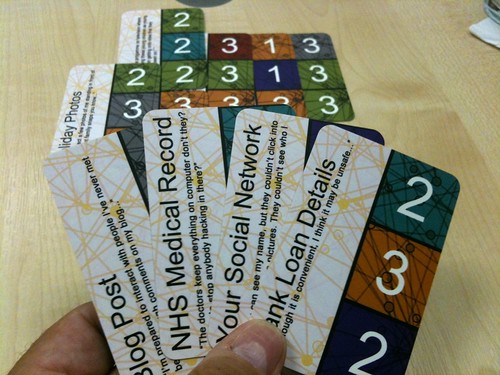 You get cards representing personal data of different kinds. Depending on who you are (each player is a different kind of business: bank, dating agency, insurance company etc) you want different datasets and you want to link them together into your corporate database. A dataset is a line of three or more data items of the same kind. Here’s a corporate database with two datasets in it: the green biographical data 2-2-3 and the orange financial data 3-3-3, these will score at the end of the game. 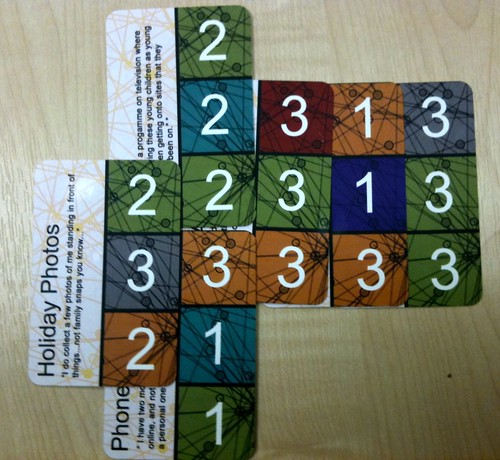 There are event cards, that pop up each round to affect the play, and some special cards that the players get from time to time. Check out the database I ended up with in the game that my colleague and I won! I was the bank, so I was trying to collect financial data in my database but I was also trying to collect social data (purple) in my hand. 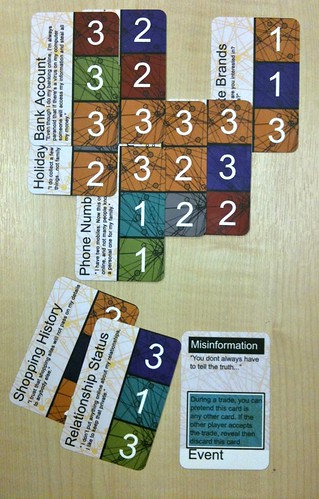 We had great fun, and we all contributed a ton of ideas. The game is being refined for a new version in a month or two, so we’ll try it again then and I’ll let you know how it’s going! I don’t know if the guys are actually going to turn it into a commercial product (that isn’t really the point of it) but I’d say they are on to a winner. My tip: instead of calling it “Privacy”, call it “Super Injunction”.