I gave a talk on the blockchain and such like to the Scottish Financial Services Club. It was a lot of fun, and I got a couple of really excellent questions that made me think on my feet, something I greatly appreciate.

I chose the example of the Old Lady of Threadneedle Street as a case study to try to illustrate just how a some sort of blockchain sort of technology might work in practice. I chose this example, because a deputy governor of the Bank of England recently gave a speech that mentioned the replicated decentralised permissionless shared ledger formerly known as the Bank of America Blockchain ™, saying that:

instead of settlement occurring across the books of a single central authority (such as a central bank, clearing house or custodian), strong cryptographic and verification algorithms allow everyone in a DLT network to have a copy of the ledger and give distributed authority for managing and updating that ledger to a much wider group of agents.

But why would the Bank of England want to do this? Why would the market participants? Let’s start with a little bit of background. The deputy governor was talking in the context of the UK’s Real-Time Gross Settlement System (RTGS). This is run by the Bank of England itself. The Bank of England’s role as a settlement agent emerged in the mid-19th century with the provision of settlement accounts for the commercial banking sector. Since 1996, these accounts have been held in this RTGS, which provides for real-time posting, with finality and irrevocability, of debit and credit entries to participants accounts. This system, which is an element of vital national infrastructure,  is used for several purposes.

• It is used settle in real-time for the Clearing House Automated Payment
System (CHAPS) payment system.

• It is also used to settle in real-time for the payment system embedded
within the CREST securities settlement system.

• It is used to settle several times per day on deferred,net basis for the
Faster Payments Service (FPS).

• And it is also used to settle on a deferred, net basis for a variety of other
retail payment systems (BACS, Cheque & Credit, LINK and Visa).

So, crucially, it is used by CHAPS. This is real-time final settlement to any limit in “central bank money”. If I send you a billion quid through CHAPS, then you have the billion quid and that’s that. No ifs and buts. If RTGS were to fall over, it would mean that large value payments throughout our great nation would be totally knackered and that would have an immediate and very serious impact (on, for example, people buying and selling houses). It is therefore a piece of vital national infrastructure.

The current system settles almost a third of the UK’s annual GDP – or about £500bn – every single day, covering everything “from salaries to company invoices, from car purchases to coffee sales, from pensions to investment flows”.

From Finextra: Bank of England to develop blueprint for overhaul of UK payments system

The current system itself dates back to 1984, so it’s not exactly the very latest in technology. But you can understand why the Bank of England should be conservative about this computer system and network of crucial national importance. They can’t afford to mess around or tinker with anything but tried, tested and utterly sound technology. This is why no expense is spared (I assume) in making sure that the system is completely reliable, safe and secure. Oh, wait…

Mark Carney, Bank of England governor, launched an independent review on Monday into the worst disruption of Britain’s banking payment system in seven years…The breakdown meant the CHAPS payment system, which last year processed £277 billion of transactions a day, was down for more than nine hours. The bank was forced to start processing the most important payments manually.

To get back to the question, then, why would a sensible, conservative and practical institution like the Bank of England be thinking about the very latest in replicated decentralised Shared Ledger Technology (SLT) in this context? They don’t need a blockchain or Bitcoin, proof of work or mining. So what do they want? Well, if you analyse the problem using Consult Hyperion’s “4×4” SLT model, you will see that there are key reasons at each SLT layer. 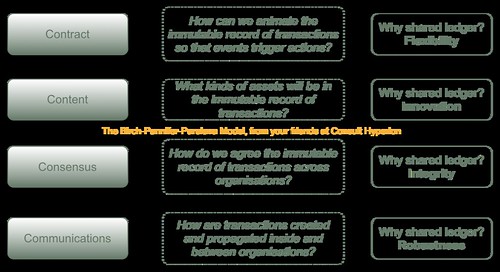 The Bank of England can, I imagine, see advantage at each of these layers:

The Bank of England is absolutely right to be exploring this new technology and I certainly think that it has something to offer. But that does not mean that the Bank of England is going to start using Bitcoin as a settlement system or that bitcoins will replace Sterling!