Another week, and another tidal wave of blockchain articles that I’ve been trying hard to keep up with. After chairing the session on the R3 Initiative at Money2020 Europe in Copenhagen, I’ve been surveying the ledger landscape to help our clients to develop their roadmaps. 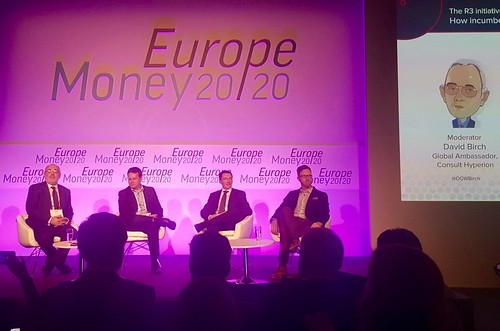 I wonder if the blockchain is going to be important or not? Better get reading. Over the last few days I’ve had some time on planes, trains and buses to look through a whole bunch of articles on the subject.

Blockchain: a short-lived illusion or a real game changer? Experts discuss if, and how, blockchain can revolutionise payments

I read this article, and just like most of the other articles I read, it really doesn’t explain either how or why the blockchain might revolutionise anything. (It uses the blockchain, a blockchain and ledgers as interchangeable terms, which bothers, me.)  I don’t really want to be known as the Victor Meldrew of the Blockchain (Michael Salmony of Equens is already there!), and I don’t mean to offend, but I do want to make a serious point: what is the point of the thousands of articles like this? Not to mention the articles about how the blockchain will / will not (*delete where applicable) mean the end of the stock exchange, child poverty or delays in firefighters using lifesaving equipment. OK, it was rhetoric, but when I told the students at the London Business School that most of what I’d read about the blockchain that day was (and I quote) “drivel”, I wasn’t exaggerating much.

They lack a basic model to facilitate communication between business and technologists so that the business idea that they are putting forward can actually be understood by anyone who might have an idea about how to deliver it, and

They lack an understandable narrative about the use of the new technology that might stimulate the development of those new business ideas.

This is why I think that some of the work that I’ve been involved in recently is so important, because it addresses both of these points in a manner that experience seems to indicate is of great benefit. I’ve been out and about using Consult Hyperion’s “4×4” model of the shared ledger technology (SLT) to help our clients to understand and explore the new business models that might be available to them. As you’ll recall, this “4×4” model works by thinking of the shared ledger as comprising four layers and the architectural choices that can be made in these layers give us four different kinds of ledgers to think about in business terms. 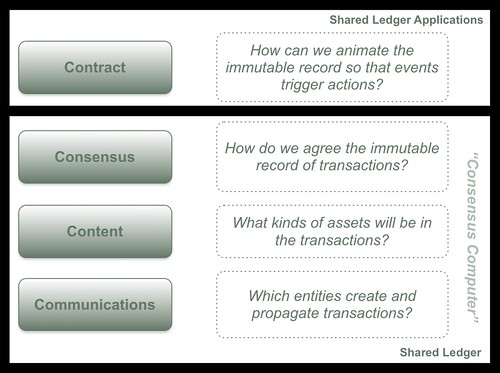 I think that the most important narrative is one of transparency. I’ve written before about “The Glass Bank” as a way to think about new kinds of financial markets built on radical transparency. Richard Brown of R3, my colleague Salome Parulava and I have a paper in the forthcoming Journal of Payments Strategy and Systems set out the basic model and the concept of “ambient accountability: which, I certainly think, will help to set the agenda around SLT in the coming months.

Transparency isn’t the only emergent property of SLT, of course. It also connects with the “single source of truth” without the need for a single point of failure. Goldman Sachs, for example, have spoken about this.

Overall, Duet’s comments were broad and positive, with remarks aimed at illuminating for his audience what Goldman Sachs saw as its biggest opportunities. To this, Duet answered that it was the blockchain’s ability to provide a “single truth” to the many institutions that need to share information on asset transfers.

Who might benefit from shifting to this sort of technology? Well, Goldman Sachs might. They’ve just been fined for some problems to do with the transparency of securities holdings.

Goldman told those customers that it had arranged to borrow, or believed it could borrow, the security to settle the short sale, a process known as “granting locates.” Goldman, however, had not performed an adequate review of the securities customers had asked it to locate, the SEC said.

This is a good example of a specific problem that might be avoided to everyone’s benefit using the single source of truth that the Goldman chap referred to above. If an investment says it has a contract to borrow some stock, then customers could easily seem for themselves that contract is in a shared ledger and they could easily check that the counterparty either has the stock or has a contract to acquire the stock in time. And the regulators could have a simple application that checks whether an investment bank claiming to have such a contract has a “Turing complete” set of contracts in place, and the regulator would have the necessary decryption keys in place to look into contracts that they might see as suspicious.

In fact, thinking about it, in an environment of real ambient accountability, the system itself would not allow an investment bank to enter into an agreement that could not be fulfilled. A bank could not do a deal with customers on the basis that it had arranged to borrow stock unless it actually had. The contract with the customer just wouldn’t work if the “chain” is broken. I hope this won’t take all of the fun out of investment banking but hopefully it will make it safer for the rest of us. Bearing in mind that I don’t really understand shared ledger applications, investment banking or the SEC rules about anything, it all sounds easy to me.

This is the sort of thing that R3, Intel (we have been working on a very interesting project for Intel in the blockchain space), Ripple and Michael Salmony will be discussing in the shared ledgers session at our 19th annual Tomorrow’s Transactions in Forum in London this week. So if you want to tap in to the leading edge of serious business discussion on the topic, come along. As always, the Forum (this year sponsored by our friends from WorldPay, VocaLink and Oslwang) will be limited to 100 people, so head on over to register for a place right now. I think there are a couple of places left and thanks to the amazing generosity of the sponsors, it’s only £295 for both days – you’d be mad to miss Barclays, Mondo, Fidor, Equens, Clearmatics, the FCA, Shell, Samsung Pay, World Remit, Visa Europe, Curve and many others in an environment of genuine discussion, debate and learning. See you there!

Tags: blockchain, investment banking, securities, shared ledger
We have placed cookies on your device to ensure that we give you the best experience on our website. If you continue to use this site we will assume that you have agreed to that.OkRead more
View full website